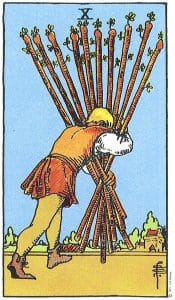 The Ten is the ultimate result of the Suite. Keywords: completion (sometimes not always positive), inheritance, bondage, getting what you deserve.

It may seem odd that the final outcome of the wands suit is a story of corrupt power, but if you remember the element represented, it is almost always impossible to play with fire and not be burned.

The most horrific thing that can happen to an ambitious person is to become subject to the will of another. But at some point, fire will consume all of it’s resources, and leave nothing but smoldering embers. At this point, the will of another has the ability to take over our own.

When the Ten of Wands appears, you are feeling burdened or subjugated by the will of another. You are overworked to the point of slavery—and your own ambition has led you here. Working hard is not the way out of this scenario, instead, you may need to ask for help, or even leave unfinished. This is very hard for someone under the burden of morality the Wands suit represents, but doing what you have to do is sometimes more important than doing what you want to do. Is this moral corruption?

This card may also appear, especially shadowed, if you are using your physicality to control your emotions. This usually results in an explosion and a breakdown. Whatever you are putting your energy into now, it is unlikely to be successful, no matter how much energy you throw into it.