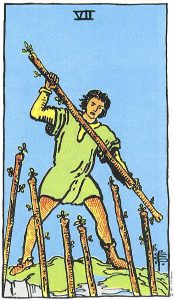 The Sevens are the result of getting a bit overambitious. They are the major obstacle of the entire story and tend to be quite negative. Keywords: Negativity, loss, theft, wanting, desire, danger.

The Seven of Wands is a story about how fear and courage play into each other. Any time we need to summon courage, it is backed by a bit of fear.

On the Seven, a man stands on a hill, a position of superiority, fending off six people who are desperate to conquer him. Anyone would be afraid to face six foes alone.

When the Seven of Wands appears in a reading, it is time to feel the fear, and act anyway. If an opportunity appears, cast away doubt and go for it. Hold your ground, for it is yours and you have earned it.

The energy of this card is not someone who is driven by fear, but someone who uses it to find their courage. You can also be assured you aren’t in an indefensible position, nor are you wrong. Proceed with confidence, unless your intuition tells you not to fight—in which case you’ve correctly applied previous lessons and know which conflict will further, your ambition, and which conflicts won’t.

Although there is conflict, you have the high ground. Because of that, you can withstand attack for as long as needed, and the result of the conflict will eventually end in your favor.