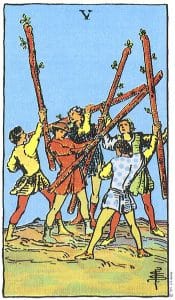 The Fives teach us what happens due to our “break” with the Four. Keywords: Loss. Fight. Tunnel Vision. Incorrect focus.

After the rest enjoyed with the Four, the story of the Five of Wands is one of returning to your tasks to find many small problems competing for your attention. It’s a story of disarray and conflict—nothing major—but multiple issues cropping up all at once demanding your time.

There may be no more overwhelming feeling than to have lots of little things begin to pile up, none more important than the other but each demanding a resolution.

It may be even worse when these issues are actually internal; multiple ethical choices draining your ambition.

When the Five of Wands appears in a reading, it’s a sign that you are being tortured with drops of water. Each item, whether it be an external task, or an internal decision, would not be so challenging on their own, but when the all appear at the same time they become almost insurmountable.

The key is to prioritize and focus on one thing at a time. Each obstacle must be overcome, but the order in which that’s done is much less important than focus, finishing one task before starting another. For internal conflicts, forgiveness and patience is important, because there can be no success if guilt remains.