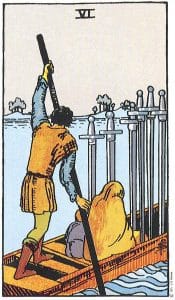 We overcome the hardship in the Five by the lesson taught by the Sixes. Keywords: Remembering, movement, sharing.

The story of the Six of Wands is a manifestation of one of the stories depicted on the Five—that choosing to leave instead of fight. It is a story of travel and movement to a better place.

Sometimes, this card appears when we are running away from our problems, a phrase that is usually followed by the idea that wherever you go your problems will find you there. The truth is, sometimes a problem can be solved after a drawn out emotional battle, by simply leaving. This may be a physical or mental journey, but a journey that leads from rough emotional waters to smoother ones, steered by our intellect.

Like the Three of Swords, the imagery of the swords sticking out of the boat here can lead some to think of this card as negative, but unlike the Three, this card is much more gentle in it’s approach of “cutting out that which doesn’t serve you.” Instead, intellect is balanced by intuition, perhaps for the first time in the story of the suit. The water depicted in this card is a symbol of the understanding that you can’t eliminate emotion just like a captain of a ship can’t eliminate water, but through true mental clarity and respect for the power of the water, you can use it to your advantage. When the heart and the head are balanced, you are in a state of excellence where anything can be achieved.