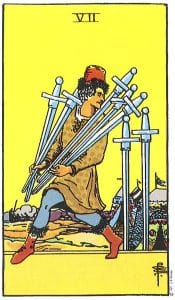 The Sevens are the result of getting a bit overambitious. They are the major obstacle of the entire story and tend to be quite negative. Keywords: Negativity, loss, theft, wanting, desire, danger.

The story of the Seven of Swords is one of intrigue, espionage, and theft. It is full of deception. The perspective of the card clarifies whether you are the perpetrator or are the victim.

Stealing is never a good idea, but it’s especially stupid when you are stealing from someone with the means to come after you. Such is the story shown on the card—a young man who thinks he is smarter than an army, goes into their camp and steals their swords.

He may even think he is doing something morally right by avoiding a war, but deception and thievery are never the way to get what you want. The army has the power to pursue the thief, most certainly will, and the consequences can be long lasting, if not brutal.

When the Seven of Swords appears in a reading, you may think you are smart enough to get away with something, but this is not the case. Even if your intelligence tells you the moral high ground is yours, never stoop to illegal activity. If you feel you have to put your ethics at risk to succeed, now is a good time to reevaluate your ethics, or revise your goal. With this energy in your life, you must also watch yourself, because there is deception around you, lying and trickery if not outright theft, and you are playing the part of the victim. If this is the case, make sure you don’t let your emotions or ambitions get in the way of the truth. Remember, the person who is deceiving you believes they are smarter than you. Prove them wrong.