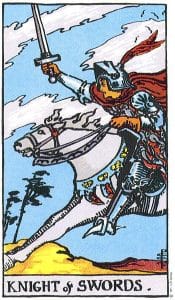 How would someone navigate the story and elemental archetypes in their early adulthood?

When the diplomacy or manipulation of the Page of Swords isn’t successful, sometimes you can only solve a problem with violence. This is the story of the Knight of Swords, whose mental journey has given him the ability to apply the sword exactly as it is intended: hasty cutting remarks.

The heart is the center of both love and fear, and as such it has been completely controlled, to the point of suppression, in the story of the Knight of Swords. This is often a card of politics, and can represent the swift and unexpected start (or end) of a conflict, including the brutality of war.

When the Knight of Swords appears in a reading, it isn’t to inspire fear. Sometimes, taking emotionless actions are preferable to a long emotional ordeal. Impartiality is needed when making impossible decisions, and the Knight of Swords will give you that shot of confidence when you need it.