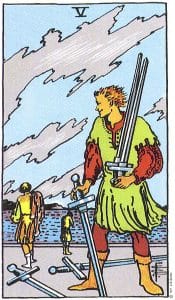 The Fives teach us what happens due to our “break” with the Four. Keywords: Loss. Fight. Tunnel Vision. Incorrect focus.

The story of the Five of Swords is the war promised after the rest period of the Four. It is a card of defeat, no matter how you slice it. Even when you think you have been victorious, any victory is really no victory at all. Take a look at the card. We have what appears to be a champion, but who are the real victors here? It’s very possible the two other figures didn’t actually lose, but knew that this was an unnecessary fight not worth fighting. If this is the case, our smug victor really won nothing at all. His victory is hollow.

When the Five of Swords appears in a reading, it is a warning to carefully consider whether the fight you are about to engage in is really worth it in the long run. True victory can only be found by not fighting at all. Smugness and pride also have no place in this card—and if you are feeling either of those emotions, then you are disillusioned, and the truth will swing back to cut you down in the very near future.