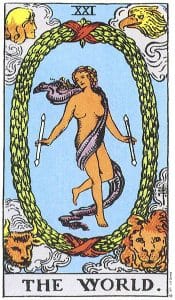 The Fool steps forward, taking the final step on his journey, and laughs. He is right back where he started, at the edge of that very same cliff he almost fell over when he was too young and too foolish to look where he was going.

Then, he thought his mind and body and spirit were all separate. The past and the future, the individual and the world, as opposites needing to held in separate spaces. Now, he sees all of these things for what they really are in oneness.

The Fool has become The Magician, The High Priestess, and yet, is still The Fool.

“As above, so below,” he bemuses, and steps off the cliff…

But instead of falling, he soars! He flies higher and higher until the whole world is within his perspective. He has become one with the angels, ending where he began, and beginning again at the end. The Fool’s Journey is complete, and he can’t wait to play the part of The Fool again.

The story of The World is one you may be familiar with if you have studied any type of spirituality: leaving duality and experiencing oneness. It represents travel, the final ending, complete understanding, full participation, a promotion, and rest.

The World is a gateway to the next stage of our life, one where the lessons repeat but are taught from the perspective of experience. You may be ready to start over, or maybe need a bit of a breather, but you can be sure you will get whatever it is you need.

You will never lose your map, because it is charted with your own experience. This is the outcome of The Fool’s Journey, so perhaps it wasn’t such a foolish journey after all.

There is a lot of symbology in this card: The bull represents matter, the lion, energy, the eagle time, and the man, space. Together they represent the universe. You may remember the wands the dancer is holding as those belonging to The Magician. In the energy of The World, creation is possible and dreams are realized, but the wands that once channeled magic have become one with their source.

There is no more work to do when The World appears. It is a card of waiting, to reset, and can be thought of as the place where the soul could await before reincarnating into the material world. The lessons you might apply to that sort of visualization also apply in the presence of this card.

We often can’t hold the idea of oneness for long, and so it is that The World is often a fleeting moment, before the next chapter begins. But that next chapter will be something you’ve seen before, just as The Fool ends on the same cliff on which he began. You will now have the opportunity to manifest and transcend the plane on which you started.

Finally, The World represents assured success, material well-being, emotional fulfillment, and spiritual growth. In the material sense, it often manifests as a promotion or initiation to a new level of knowledge.

So step off that cliff and soar! It isn’t a risk, it’s your purpose. Remember that life isn’t a straight line, but a circle that encapsulates your life. The past, present, and future are now, and are all part of eternity.