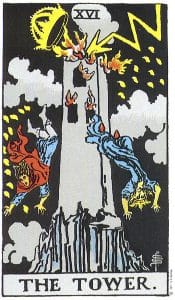 The Fool has not had an easy time. He thought he was on a spiritual journey, but as he approaches The Tower, his desire to leave a material mark on the world resurface. The Fool, in fact, built this tower in his younger years, and still today he sees happy, wealthy men enjoying the spoils of his labor. He can’t help but feel a sense of superiority.

But then, a bolt of lightning flashes across the sky and strikes the tower. The Fool watches in fear and dismay as this symbol of everything he has built crumbles to ash.

Shaken to the core, The Fool falls into a state of despair and grief, but he is also filled with a sense of awe and clarity. His spiritual eye is open. He has conquered the chains of addiction, sacrificed for perspective, and even understood death. Now he has done the hardest thing of all by watching the lies he believed about himself, about his importance, about what it meant to leave a mark on the world, be destroyed.

The only thing he can find in the rubble is absolute truth, the final destruction that has laid his life bare, a perfect place to rebuild his soul.

The story of The Tower is one of a swift and destructive clearing of your life, a tearing down of beliefs and structure, and releasing blocked emotions, in order to make room for the next stage in your life. When your attitudes and beliefs are outdated, they have to be let go—whether you like it or not.

Humans often place a crown of wisdom upon our material possessions or creations. Just as we build internal walls to protect the ego, we build external idols to our accomplishments. But there is not much wisdom to be found here, and when we attempt to block the flow of wisdom by capturing it behind some ego-driven dam, can we really be surprised when it comes bursting out with destructive force, often resulting in ego death, destroying the creator in the process?

Everyone is afraid of change to some degree. When wisdom is about to be forced up on you, or ignorance stripped away, The Tower will appear to help you prepare. In its presence, you have a choice, much like in the Death card, to accept the destruction and see the opportunity to build on a firmer foundation, or attempt to plug the dam, and have the weight of wisdom hit you like a bolt of lightning. Remember that when the Tower appears, nothing you think is safe is safe at all, but all change that is coming will happen because it needs to happen. You are either focused on building the wrong thing, or, at a minimum, it’s time to move on. This is your spiritual wake-up call.