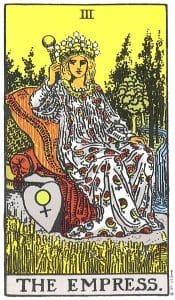 Like anyone who is excited about a new idea, The Fool is impatient and wants to turn the direction The Magician and The High Priestess gave him into a fully realized reality. This is when he comes upon The Empress, seated in the center of a beautiful garden. Her hair is the color of wheat, and she is pregnant. The Fool tells her his story, and she invites him to sit with her for a while and learn how to develop his ideas, teaching him that a seed needs nourishment, sun, water, and constant care to bare fruit, just as his ideas need time to transform into their full potential, carefully curated under his watchful tending.

For the first time, The Fool feels at home, and spends many long days learning from The Empress. He builds his first life with her in the garden, but eventually grows restless. The Empress is happy here in a life that is of her creation, but her life is not The Fool’s, and eventually, he must learn the hardest lesson of all: that it’s good to know when to put down roots and build a life, but it is also good to acknowledge when it’s time to leave the things you’ve built, to seek out new adventures and bigger opportunities. The Fool understands his own future will take time to create, thankful for The Empress’s lessons.

The story of The Empress represents a departure from the dualistic philosophy of the first three Major Arcana. Instead of dealing with just positive and negative, black and white, the Tarot now begins to focus on the unification of the Mind, Body, and Spirit. The Empress is a representation of the physical body and the physical world. Her world is natural, abundant, and fertile. The Empress doesn’t just live in the garden; she is the garden. She is as beautiful as any flower, and smells of the wind. She is a representation of Mother Earth, and as such represents the oneness that is a new-age idea encompassing all of us.

Every physical thing in this world is a creation of The Empress, sometimes born out of hard work or suffering. To see her creations realized, she doesn’t shy away from the difficulties of life. Because she so loves of her creations, she treats them all with equality, but can sometimes be overbearing. She requires unity to ensure no harm to come to any of her creations, so sometimes her world, while beautiful and expressive, can become stagnant or stuck. You can’t stay in the presence of perfection too long without your own perfectionism becoming a burden, making the perfect love of The Empress feel like a prison. You don’t want to become dependent on The Empress or forget how to rely on yourself.

When The Empress shows up in a reading, celebrate her love and bounty and know it’s yours for the taking. Creative ideas will come to fruition. If you are trying to start a family or have questions about pregnancy, know that it is near. Open yourself to unconditional love, accepting love from yourself and from others. Now is the time to cultivate your seeds with full expectation of a good harvest. But remember that visiting The Empress is a vacation, not a place you can stay forever. When the real world calls, you need to go back to it, rejuvenated with the new ideas you’ve born from the success you’ve reaped.