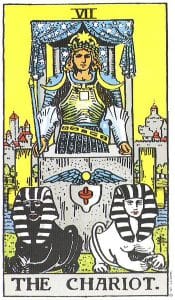 Close to completing the goals he originally set with The Magician, The Fool has started feeling stuck. It’s true he’s been successful, and even found love via a new path, but now he realizes his success is creating enemies. Stress, anxiety, bad circumstances, and problems along his road have become so commonplace that he’s starting to get tired, wondering if he’ll ever complete what he’s set out to do.

Walking a long the ocean shore, watching the waves come in, The Fool contemplates what it’ll take to get moving once again. It is on this shore he happens upon a charioteer in an ornate chariot, his noble black and white steeds at rest.

The charioteer, with a strength in his face that The Fool can only believe has been won by conquering many battles, seems the perfect person to ask for advice on how to overcome an enemy that seems to have infinite energy.

“Consider the tides of the ocean like an enemy with infinite energy,” the charioteer muses. “If you swim against the tide you will certainly tire and drown. Instead, you must swim diagonally as you come toward the shore. Similarly, I find victory in a chariot only by coming up on the side of the enemy I wish to defeat. Learning to steer opposing forces, like the light and dark beasts that pull my chariot, is the only way to success. Without my harmony and guidance, the steers would keep the wheels turning, but we would never agree on a destination.”

The Fool is both impressed and inspired, already considering out-of-the-box ways to unite the forces he thought were working against him to instead work in his favor.

“One more thing,” the charioteer says. “It’s important to remember that victory is the beginning of the story, not the end. Victory is shortsighted goal. Be sure you have a strong conviction to your cause, so that your conviction doesn’t waiver after the first battle.”

Now The Fool has what he needs to change his definition of success. It isn’t about being victorious in his short-term goals; it’s about making a difference.

The story of The Chariot is one of uniting opposing forces. It can represent a time in your life where two parts of yourself that were once at war finally come together under you masterful control. Outside of yourself, you’ll find that you’re put in a position to resolve conflicts between people, and become a source of confidence and advice to your peer group.

The Chariot teaches us that inner enemies are harder to beat than outer ones. The wisdom we gain by conquering our outer enemies is nothing compared to the self-esteem we earn by defeating our fears.

When the Chariot appears it is important to realize that we are being told that our negative emotions and darker side of ourselves has the ability to be put to better use, to drive us into action. Notice how the imagery of the card is almost militant. Your willpower sets the pace, but The Chariot is a card of forward movement.

If you are not making progress, or find yourself directionless or idle, it is usually because of low self-esteem. The Chariot invites us to hold all of the darkness, and all of the light, with equal respect. Honor your fears and your shortcomings as much as you honor your strengths, for all must unite, excite, challenge, and motivate you in order to drive forward into tomorrow. Once you get moving, you’ll even find that your darker motivations create some unexpected benefits.