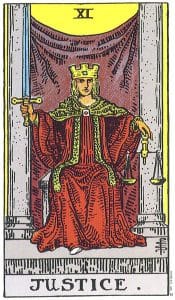 Looking for a new direction, The Fool stops in the middle of a town square to observe Justice presiding over a case in which two brothers are squabbling about their recently deceased father’s inheritance.

One brother is rich, and the other is poor.

“I should get the inheritance,” the poor brother argues. “I need it more.”

“I should get the inheritance,” the rich brother counters. “He’ll just squander it.”

Justice swiftly decides to split the money between the two brothers, and both leave the proceedings unhappy.

“You were totally fair,” The Fool tells Justice.

“Indeed I was,” she responds. “With half the money, the rich brother will spend more wisely and focus more on the need to feed his spirit, and the poor one will have all he needs. Though they cannot see it, the decision was good for them both.”

The Fool thinks about his own life and the times in which he’s been unhappy with decisions that may have been best for him in the long run. He decides that he has spent too much time meeting his physical needs, and not enough time on his spiritual development. He thanks Justice for her fairness, as well as her unexpected lesson.

The story of Justice is one of getting what you deserve, not necessarily what you want, in the face of two universal laws. The first law is cause and effect, and with this law Justice reminds us that even small actions we take can have large down-stream consequences. While we have the ability to choose our actions, in the face of Justice we often don’t get to choose the consequences. Even bigger still is the second law: the law of Karma. Karma tells us that in addition to being unable to see the down-stream consequences, what we put out into the universe will eventually come back to us.

Justice usually only refers to man-made laws and consequences when they align with universal law. Where man-made Justice fails, universal Justice doles out judgment swiftly and without mercy or exaggeration. When this card refers to actual court cases or legal proceedings, it’s important to remember that this card isn’t about beating the system or seeing what you can get away with, but about the eternal and universal consequences that will inevitably follow. You can’t escape Justice, regardless of whether you deserve good will or an ill fate.

Just like any sword, Justice is double-edged: both fair and cruel. If you deserve good things, then they are rewarded without congratulations or pompous ceremony. If you deserve punishment, then it is given without mockery or compassion.

When this card appears, it is a stern warning to judge yourself so you will not make decisions that you will regret later. Chances are that you will meet Justice if you stay on your current path. Whether this is good or not is up to you to decide and based on the choices you make.

In rare circumstances, Justice may appear as a representation of the Querent. You may be in the process of meeting the Justice of others (or being misjudged by them). Use this energy to solve a problem in your life. It is a cue to not take sides, to be fair and honest, and to act in fairness without mercy or severity.