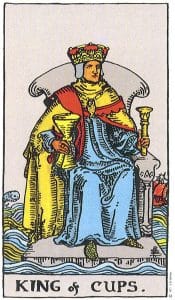 How would these archetypes be applied by a grown adult, if the divine feminine was stripped away, leaving only the divine masculine?

The story of the King of Cups may seem a bit out of place if you are looking through traditional perspectives (as Tarot often does). Divine Masculinity mixed with the water element of emotion and intuition is actually a divine contradiction. This is why the King of Cups always represents a situation or person that isn’t what or whom it/they appear to be at first glance.

When the King of Cups appears in a reading, look for contradictions or other such things that don’t traditionally belong together. In the presence of this card that doesn’t mean that two contradicting things can’t work together (as we’ve seen in other cards like Temperance). In fact, the strong fiery energy of the King mixed with his emotions makes him a great example of generosity and confidence. He is merciful, a wise advisor, and a noble healer. He can listen even when he’s hearing opinions that contradict his own, which makes him a talented diplomat.

But the King of Cups is almost always hiding something. Usually it’s his volatility, but it could be his true opinion, or the fact that he lacks confidence (even though no one would know it). There is almost always ulterior motives because his true emotions are always just below the surface.

When the King of Cups shows up in a reading it is an indication that diplomacy is required to solve your problems. Know what secrets to keep, and which to use to your advantage. Letting people speak for you may be your best course of action. The idea of moderation that also existed with the Queen is also true here: walk the middle ground, and you’ll be safe.